October 30th 2015 was Senior night for the Cardinals in Magnolia, and again thanks to AirGas, we were able to record some great things. This year, however, we also recorded the band’s performance in addition to the Football Team.

Unlike the year before, the winds were less but the weather was much colder , therefore the previous setup of 6 balloons did not have enough lift. I added a second set of 5 balloons  3 feet above the 6 balloon set to create a lift platform and kept the 6 balloon platform to make it stable and not wobble back and forth. It seemed to work pretty well, to load all the balloons took nearly 2 hours and nearly 300 lbs of helium. 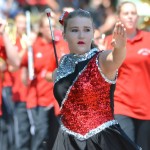